The story of Chris Mikkelson:

Christ For the Nations Institute (CFNI) alumnus Chris Mikkelson has an authentic passion to bring the Good News to the nations of the earth.

Here is his story. 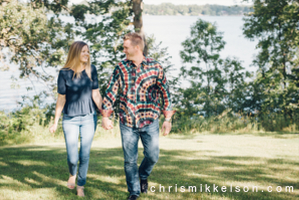 Chris grew up on a dairy farm in a small town in Minnesota. Both he and his future wife Amanda got radically saved out of the lifestyle of drugs and alcohol in 2006 and were married in 2007. Shortly after their salvation, Chris’ mentor recognized the call of God on his life. He encouraged the couple to get ministry training at Christ For the Nations Institute (CFNI). As Chris and Amanda were praying about coming to the school, they strongly felt that CFNI was the direction that God was pointing them in, so they packed everything up and moved to Dallas in January 2009. They both completed the two-year program at CFNI and Chris graduated from the Third Year Pastoral Major in December 2011.

Passion For the Gospel

Chris says that CFNI was the training ground that God used to prepare him for his ministry as an evangelist. “Even before coming to CFNI, I had a passion for people to know about Jesus and experience the salvation that I had. At that time, my form of evangelism was telling people that they were going to go to hell if they didn’t receive Jesus as their Lord and Savior,” Chris admits [laughingly], adding that the method he used didn’t get anybody saved and led him to passionately pursue how to better communicate the gospel.

At CFNI, every new student is required to sign up for a student ministry. As Chris was looking through the list of ministries, he saw “street evangelism.” He knew that was something that he needed to choose. At the time he couldn’t even imagine that this decision would one day lead him into doing massive Gospel crusades all over the world.

The first time Chris led someone to the Lord happened during one of those CFNI outreaches in downtown Dallas. “From then on, the passion to win the lost began to grow in a dramatic way,” says Chris.  A few months later, Chris attended a conference with evangelists Reinhard Bonnke and Daniel Kolenda. During one of the sessions, Chris’ friend leaned over to him and said, “Chris, I can see you working for Daniel Kolenda one day.” Chris couldn’t imagine doing that. “I’m not anyone special. I grew up in a small town. I just got saved,” he thought. Nevertheless, he took notice of his friend’s words.

One day, as he was driving home from work, he told God, “I really want to tell people about You. I want to preach the Gospel in the nations. If you call me to do evangelistic crusades, I would love to do that. But not my will, but Yours be done. Just show me what You want me to do.”

A few minutes after praying that, Chris received a message from his friend saying that he had a dream about him. In the dream, he saw Chris preaching the Gospel to a crowd as wide and far as he could see. It was the first confirmation from God about Chris’ calling as an evangelist. From then on, he has received many other confirmations. 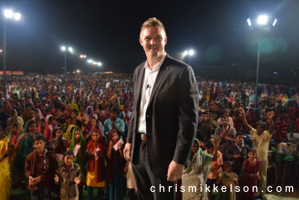 One day Chris was reading Gordon Lindsay’s autobiography, and he found a passage in which Gordon stated that a young man who is called to be an evangelist should serve another evangelist for a season in order to grow in his gift and avoid the mistakes that inexperienced evangelists tend to make. Chris knew that this was something he needed to do; however, he never tried to make things happen. He didn’t even pursue ministry at that time. He was simply focused on seeking the Lord.

“The whole reason we have ministry is because of Him. He IS ministry. Pursue Jesus and let Him open up the doors for you,” says Chris.

In his last year at CFNI, Chris got connected with Evangelist Bernie Moore, who came to speak at CFNI. Bernie invited Chris to coffee and made two proposals to him. He said, “First, I would like to invite you to join me on my Gospel crusade to India this year. Secondly, a good friend of mine is in need of a personal assistant, and I think you would be great for the job. His name is Daniel Kolenda.” Chris couldn’t believe his ears. He was speechless.

Chris started working for Daniel Kolenda at Christ For All Nations (CfaN) in January 2012.

During his first year at CFaN, Chris focused solely on serving Daniel. He didn’t take any speaking engagements or try to promote himself. In his second year there, God started opening doors for him to do local ministry.

Then, the doors started opening internationally. In his third year, he received an email from his CFNI classmate who was now overseeing hundreds of churches in north-eastern India. He invited him to be a speaker at the Gospel crusade that he was planning.

With Daniel Kolenda’s approval, Chris started a nonprofit organization in order to raise funds for that crusade. His ministry began quicker than he had expected, and it was getting more and more difficult to handle both job and ministry. It was the time to make a decision about his future. 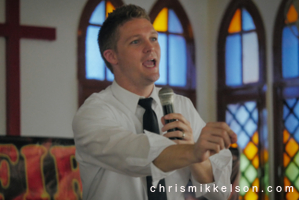 “At that time, I was serving as the USA Crusade Director for evangelist Reinhardt Bonnke, and it wasn’t easy to leave such a high-level position and launch out into the unknown without having financial support,” says Chris. But he knew that he knew, that God had clearly called him to step out in faith. He left his job and went into full-time ministry in March 2015.

“The vision of Chris Mikkelson Evangelistic Ministries is to see people come to Christ in the darkest, most unreached nations of the world, as well as in America,” says Chris. Since 2014, Chris has preached and planted churches in many nations, including some of the most unreached ones.

“When someone shares with me about their desire to become an evangelist and do Gospel crusades, I tell them the simple truth that Daniel Kolenda taught me. ‘Just be faithful with what you have where you are.’ If you are faithful with the little, God will make you ruler over much. God Himself opens doors that no man can shut. It’s not about pursuing ministry, but it’s about pursuing Jesus with all that you have.

I didn’t start by preaching to the nations. I began my ministry by loving on the homeless, lost, broken and hurting, and preaching the Gospel on the street corner. When I first started praying for the sick, there weren’t many people who were healed, but I kept praying and miracles started happening more and more,” Chris said. 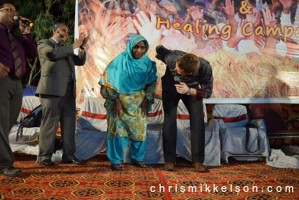 One of these miracles happened with a teenage boy in Sri-Lanka. He was crippled from birth, couldn’t talk and one of his hands was paralyzed. On the first day of the crusade, he started walking for the first time. Later, his mother reported that he started speaking clearly and could use his hand.

Chris has seen blind eyes open, tumors disappear, body parts healed and people set free from demonic spirits, both overseas and in America. “Be faithful and watch God move. Expect God to save, heal and baptize people with the Holy Spirit. He wants to manifest Himself through you. But first and foremost, pursue Jesus with all that you have,” says Chris.

Christ For the Nations Institute (CFNI) is a Bible College in Dallas, TX.  For more information about CFNI, attending the Bible College or their conferences click HERE.

To donate to Chris Mikkelson’s Evangelistic Crusades, use the Donate button below.