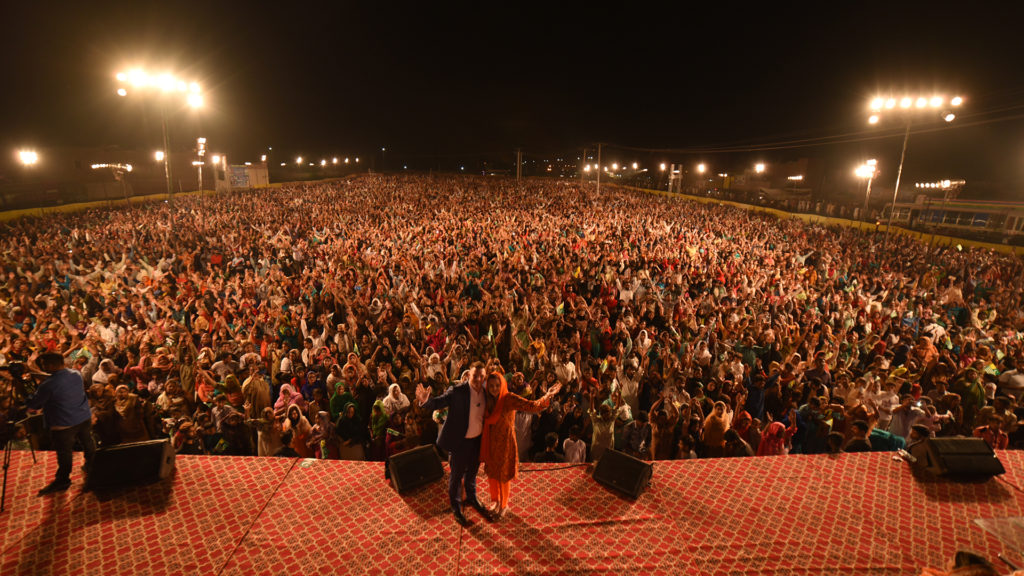 We had an absolutely historic crusade last night near the Middle East!

I’m being told by the local pastors, government officials and the local people here that this was a historic crusade for this entire region and for this city. In fact, they said a crusade on this scale has NEVER been conducted here and the last time they had a city wide Christian gathering of any kind in this region was over 22 years ago with only a couple thousand in attendance. But tonight, the field was packed to capacity and thousands of people lined the adjacent streets and gathered on nearby rooftops and the tops of nearby busses to watch and listen.

This city has been known for years as a very difficult city to do crusades like this in. Many have tried in the past but were unsuccessful. It’s a difficult region because there’s so much instability here and a lot of security concerns for Christians in this area. In fact, last night, we were supposed to spend the night in the crusade city, but the local pastors were adamant that we leave town right after the crusade due to security concerns. When it comes to doing crusades in this part of the world, there can be many challenges, but we press on and we praise God that thousands were saved last night as a result.

Last night, I preached a crystal clear gospel message on “Redemption” and to my surprise, when I made the altar call for salvation, it looked from stage as if over 90% of the crowd stood to their feet to receive Christ for the very first time. Praise God!

After the altar call for salvation, I prayed for people to be baptized with the Holy Spirit and then I prayed for the sick and many miracles broke out. Many demoniacs were also set free and hundreds of people came forward to testify of being physically healed as well.

Here are just a few of the testimonies from last night:

Thank you so much for praying for us and for partnering with us financially. As many of you know, we had a major financial need just a few days before the crusade. God provided a miracle and so many of you generously gave as the Lord directed you.

I want to say “Thank you!” for partnering with us financially in the harvest! We simply can’t bring the gospel to these places without faithful financial partners like you and I know together we will see all of these new believers with us in heaven one day. Together, we’re making an eternal difference in the lives of countless thousands and even millions of people around the world.